Shakespeare Schools Festival is the UK's largest youth drama festival, offering students from all backgrounds the opportunity to perform Shakespeare on their local professional stage. If you would like to find out more, please visit their website at: 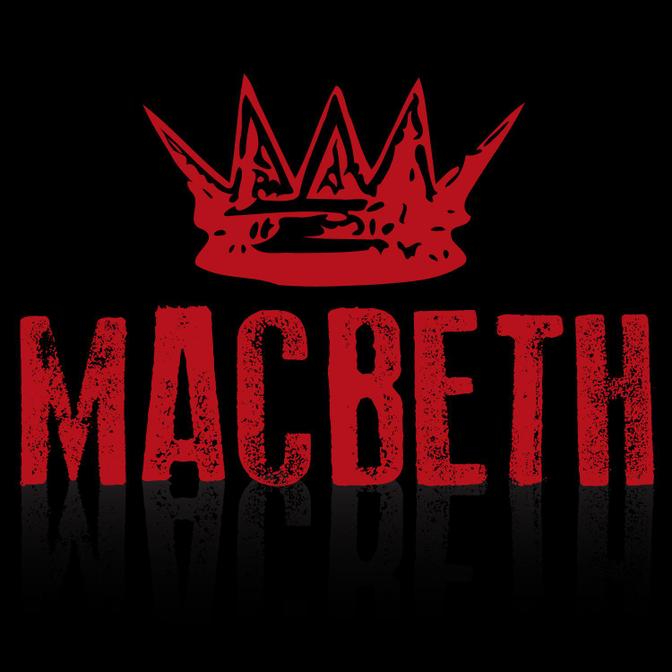 Here are some photos from Macbeth rehearsals showing the cast's creativity in creating scenes from the play!  Can you guess what is happening in each photo?

This year we tried something completely new to us in Shakespeare Schools Festival! We put together a performance of 'Julius Caesar' - a play that had us re-live battles of power with manipulation and friendship at its core. The play was incredible! The children worked very hard and the final piece was full of energy and superb acting. Well done to all involved!

The cast of 2017 were invited to the Shakespeare Schools Festival launch at Piccadilly Circus. This was a HUGE honour as we were the only Primary School asked to participate in this event!

The CEO of Shakespeare Schools Festival, Ruth Brock, described our performance as, “confident and inspiring” with a “striking ensemble.” Many teachers and families of the cast attended the launch and were all extremely proud. Have a look at some of the photos taken on the day below. 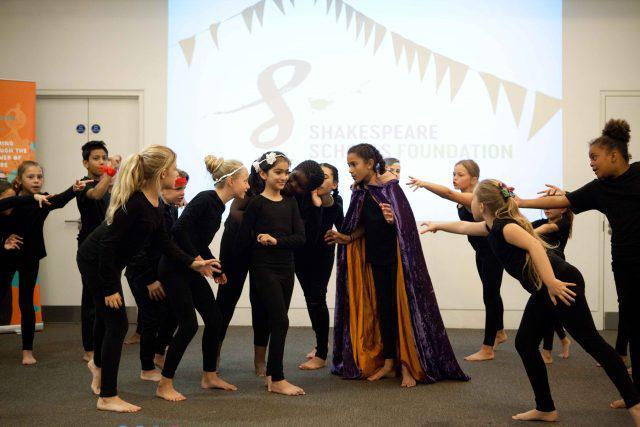 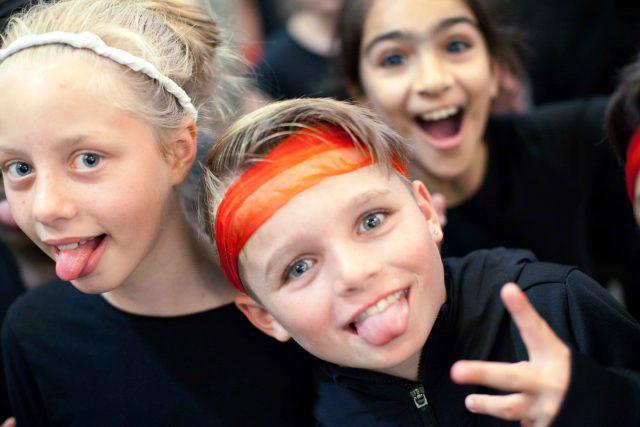 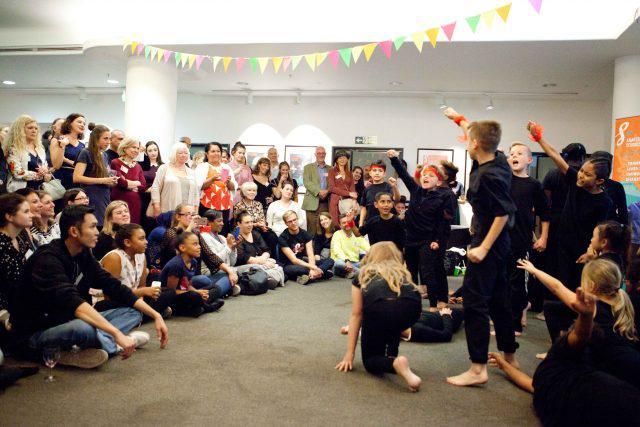 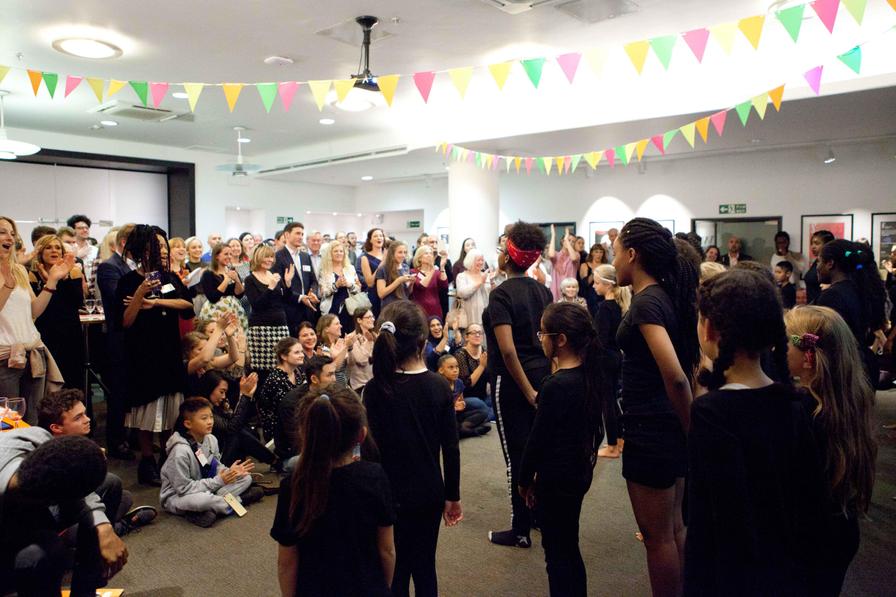 Can you believe it? Out of ALL the schools who take part in Shakespeare Schools Festival - which is a lot! - Malmesbury were chosen to take part in a West End production of ‘The Trial of Hamlet.’

7 children from the cast of ‘A Midsummer Night’s Dream’ represented the school at the Wyndham’s theatre on Sunday 27th November.

In the play, Hamlet was on trial for the murder of Polonius. It was an improvised performance – meaning lots of the actors were making it up as they went along!

In the end, the audience had to decide whether Hamlet was GUILTY or INNOCENT of the crime. Find out what the decision was by clicking on the link below to The Evening Mail's article on the production.

The children performed a ‘flashback scene’ where Hamlet put on a play to try and see if King Claudius was guilty of murdering his own brother!

We met the children at 11.30am outside Morden Station and eagerly made our way to the theatre in Leicester Square. We had a very busy morning/afternoon with some rehearsal time on stage including a full technical run through with the professional actors – we were joined on stage by Lee Mack, John Heffernan, Meera Syal, Hugh Dennis and Tom Conti. Alongside the professional actors was an admirable line up of REAL judges and lawyers, including: Lady Justice Hallett (Judge) John Kelsey-Fry QC, Jonathan Laidlaw QC, Shaheed Fatima QC and Ian Winter QC.

In the evening we were treated to a delicious dinner (thank you Papa John!) and a meet and greet with some of the celebrities who were taking part in the performance.

The children were PHENOMONAL! They absolutely stole the show with their comical sketch; they showed off their exceptional acting skills and had the whole audience (over 700 people!) in stitches. The actors were all thoroughly impressed with the children, and the judge and lawyers were keen to compliment the confidence of the cast. We are so, so proud of everyone, as are Mrs Bonner, Miss Cavanagh and Miss Gibson who came to watch the children in action. Well done to all involved!

In 2016, the children put on a performance of 'A Midsummer Night's Dream.' The play was filled with mischief, magic and mayhem...and of course a little sprinkling of love! Our cast had us on the edge of our seats and doubled up with laughter as we pieced together one of Shakespeare's classic plays.

'I wish there was another Shakespeare play this year!'

'I hope my secondary school does Shakespeare Schools Festival.'

In 2015 Children from Year 4, 5 and 6 performed one of Shakespeare's last written plays, 'The Tempest'. With a comical mix of betrayal, magic and mayhem, the children working incredibly hard to put on a performance of a lifetime!

'I really liked making new friends and feeling like part of a family.'

'I never realised I was good at acting and now I know I want to be an actor when I'm older.'

We were in the paper! Some important people at The Telegraph decided that they would LOVE to do a newspaper article on Shakespeare Schools Festival and Malmesbury were put forward for the job! We feel extremely proud... Click on the link to read the article! 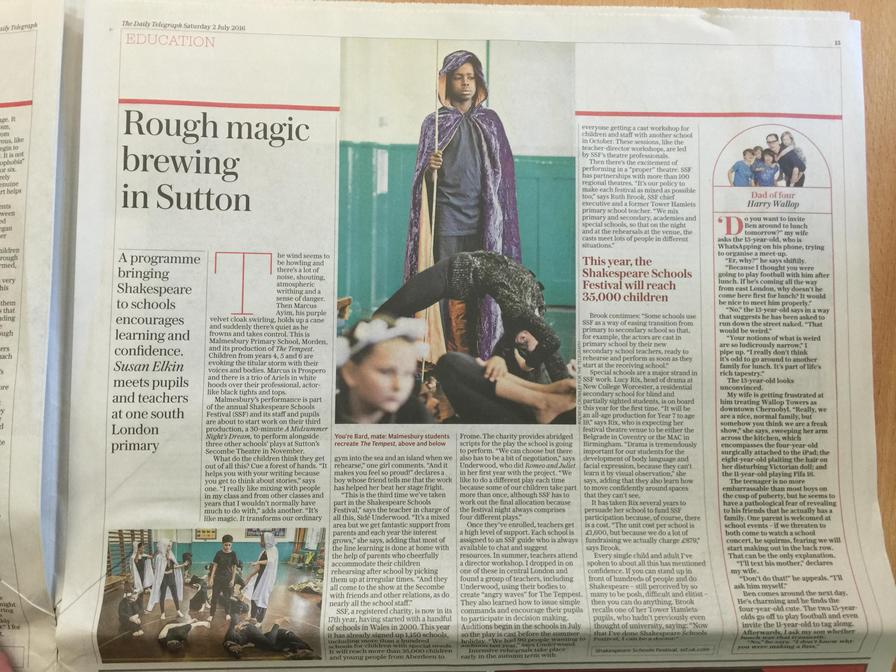 In 2014, children from Year 4 and 5 performed one of Shakespeare's most well known plays, 'Romeo and Juliet'. The children worked together to create a variety of atmospheres on the stage, ranging from love to hate and trust to betrayal. All of the children should be extremely proud of themselves for putting on such an incredibly emotive performance!

What the children have say:

'The best, most fun thing I've ever done!'

'I want to do it again next year and ask all my friends to do it too!'